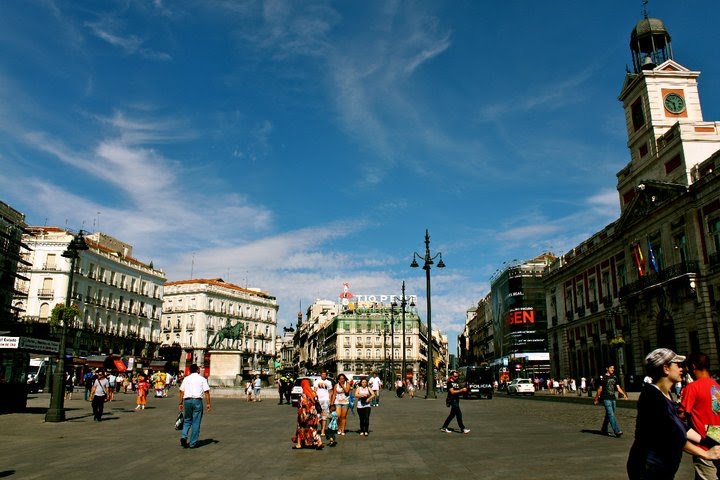 “In Spain there's the king - and then there's Antonio.” Melanie Griffith
Manila, 2004

My boss puts my resignation letter down on his desk and looks at me, as I gather to compose myself. I have already practised what to say. I have been memorizing my speech since the day I received the BIG news. My boss arranges the pile of printed memos scattered on the table and stirs the coffee that has long been cold. He looks at me waiting for my reply. Why Spain? I repeat the question in my head. But before I can open my mouth, he proceeds to talk.

“Are you sure you want this?”

He says in a low voice. I nod my head.

“Are you ready to give up everything for this?”

He looks at me in the eye. I nod my head once again. He is referring to my current position at work. I have just been promoted for the second time. I have just gotten my first ever car from the company. I am a District Sales Manager. I handle at least fifteen people. I am enjoying the respect of my colleagues, not to mention the perks and bonuses that the company has been giving me. Am I ready to give this all up? I glance at my resignation paper that my boss is still holding. I mindfully chose the right words when I wrote that letter. I consciously didn’t want to part in a bad tone. I want this to be perfectly fine. I know they will understand. This is my dream. Going to Spain has long been my dream for years now. They know that.

“You will give up your car, your position, the benefits, your bright future in this company. Have you thought about this? You are giving up a lot of opportunities for your future. Aren’t you worried about what if this Spain thing of yours will not work out and….”

I decide not to let him finish his sentence. I open my mouth.

“Yes sir, I have thought about this a hundred times. I am ready. I am prepared for whatever is in store for me in Spain.”

My boss doesn’t react. He stirs his coffee again and this time raises the cup and leans forwardto take a sip. He reaches for his pen and signs his signature at the bottom part of my letter.

“Did you also furnish a copy to Human Resources?”

“Well then. It seems that you have already made up your mind. I wish you good luck and I hope you made the right decision.”

He offers his hand. I stand up to reach it. I take a deep breath and give my boss a smile. This has been easier than what I have imagined.

“Why Spain?”, echo the five voices surrounding me right now. The news has spread throughout the office and I have been bombarded by questions about my resignation. The five curious faces are now looking at me as if I have committed the most heinous crime against humanity. You see, I have kept everything a secret. From the time I applied for the scholarship up to the time I received the result. I thought it was surreal. Finally, my chance of going and living a life that I have dreamed of. I didn’t want to jinx it. Only my family and some selected friends knew about the exciting news. I perfectly remember that afternoon when a friend called to inform me that I was in the list of lucky scholars bound to study in Spain. I was about to jump for joy and hug everybody only to later on realize that I was in a conference room having a meeting.

Of course they already knew about my Spanish classes every Saturday afternoon. But to actually pursue something as big as this, they never thought I would go this far. They were only aware that I was the odd guy learning Spanish. Just to pass time. One of my bosses even joked about it.

“ Why Spanish Ñel? Why not take French? Or German? Spanish is a dead language.”

They couldn’t understand why I would waste my Saturday afternoons learning this “dead” language for nothing. What good would it give me, they argued. Spain is not a world economic force to reckon with anymore. Why even bother to go there. I just shrugged off whatever remarks they said. I was not going to let them affect me nor my dream of one day, living in the land of Don Quijote. I assured them I just loved what I was doing and I loved Spain for that matter. It was my breather from the stress my job was giving me. They skeptically accepted my line of reasoning. They tried to hide their cynicism so as not to offend my enthusiasm. They feigned support so as not to upset me. They concealed their doubts so as not to pull my spirits down. Until today.

“Are you really really sure Ñel? One hundred percent sure? You are leaving us for Spain? Do you know what you are up to?” One of the five voices echoes through my ears.

I can’t blame them. Their reaction is predictable. For most Filipinos, America is the only country outside the Philippines that can offer a bright and promising future. The land of milk and honey. Though, the Philippines was colonized by Spain for three hundred years, we don’t show much affinity with our former colonizer. After the Spaniards left the Philippines, the Americans took over. The pro-American stance taken by past and present governments left the Philippines finding itself alienated to its one time colonist.

We may not speak Spanish, but the Spanish culture is a great influence among Filipinos. We are 80 percent Catholic. We are the only Asian country that has Spanish sounding surnames. We celebrate fiestas all year round. We employ 20 percent of Spanish words in our language. We are even described as the Latinos of Asia for being happy, cheerful and friendly, traits that we share with the Spaniards. Sadly however, for most of us, Spain is just a thing of the past. A former colonizer, that is. The old world. Nothing more than bullfighting, paella, guardia civil or Julio Iglesias or Real Madrid and Rafa Nadal for the younger ones. Nothing more.

I must admit though that I was once one of the many who thought of Spain this way. But this did not stop me from exploring the possibility of visiting this once great nation. It all started after watching a documentary about Spain. I was intrigued by its beauty and magic. I was beguiled by its grand culture, its fascinating history. I woke up one morning telling myself I was Spain-bound. Actually the truth was, I wasn’t sure how this whole Spain thing was going to happen. Maybe luck would just come knocking at my door one day, like a long lost rich grandfather looking for a long lost grandson to bequeath his riches to and that grandson turned out to be me. I would then use that money for Spain. I would be living my dream. Everything would be like, wow! But this was very far from happening. First and foremost, my two grandfathers are already dead and were not rich. I had to do something to make my dream come true. In between salivating daydreams, I took Spanish classes at the Instituto Cervantes in Manila. It was heaven. I couldn’t describe the satisfaction that I felt being with my classmates knowing that we shared the same interests and the love for Spain. And whoever said that Spanish was a dead language must be skinned alive.

I fasten my seat belt. I can’t contain my excitement. I am finally going to Spain. There are still passengers standing in the aisle looking for their seats. I look outside the window. It’s dark. I feel my mobile phone vibrating. A text from my brother, reminding me to pray the rosary during the flight. Obviously it came from my mother. I can’t help but smile. After 28 years, I will be away from my family. I will be living alone in a foreign land. I press the keys and type “Okidoki.” I switch it off and recline my seat. In 18 hours, I will be in a totally different world. I hear the flight attendant speaking on the PA system telling everyone to settle down. In a few minutes, the plane starts moving and prepares to take off. I comfortably rest my head against the window. This is it, I tell myself. I reach for my pocket, fish inside it and take out my rosary. But before I start to pray, I hear myself saying.

“Why not Spain?”
Posted by NataSismaVillalluna at 10:33 AM 7 comments: